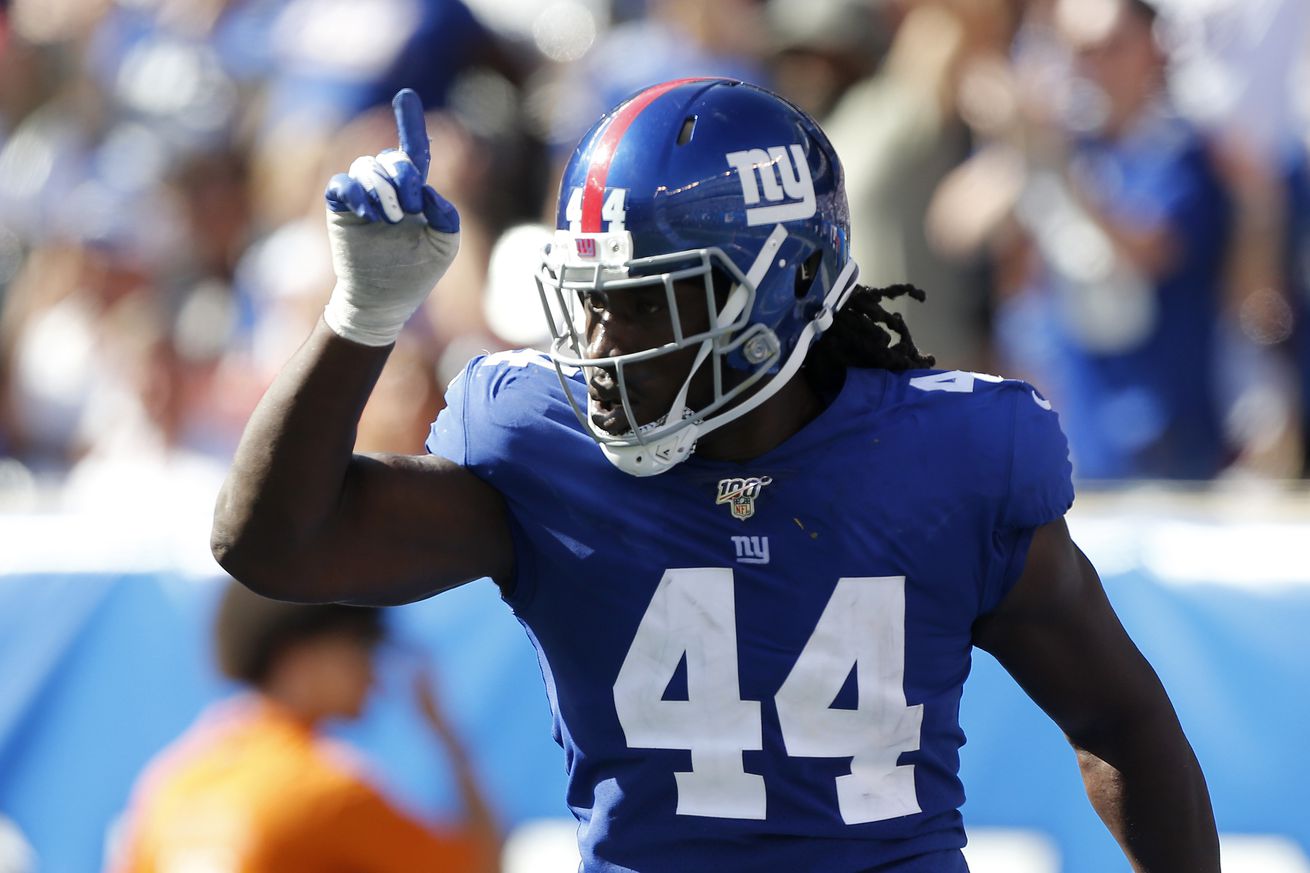 While we wait on Clowney’s decision, let’s window shop some backup plans.

The Titans have been awfully quiet ever since Wednesday’s shocking trade of Jurrell Casey. That’s not necessarily abnormal — Jon Robinson frequently moves in silence during times like this — but it can be frustrating for fans who, rightfully, want to know what the extra money freed up by Casey’s trade will bring to the roster.

The biggest and most discussed option right now is Jadeveon Clowney. The former Texans and Seahawks pass rusher is the most talented player left on the market, though he does have some drawbacks as a potential investment.

The Titans are reportedly one of a few teams that have offers on the table for Clowney, but reports are still all over the place right now. Some say his highest offer is around $13 to $14 million per year while other say his best option sits at $18.5 million annually. Even the language used to connect the Titans to Clowney is loose. Gregg Bell — the most credible source to go on record to date — said that the Titans and Jets are “believed to be” the other teams in the mix besides Seattle.

So we really don’t know much at the moment with regards to Clowney. The Titans may or may not be in the mix. The offers might be around $13 million or $18 million. There was an EA Sports video that got released showing Clowney in a Titans uniform that got deleted shortly after going up. There is simply very little reliable information on this right now.

So while we wait for that info to come rolling in, let’s take a look at what’s left on the free agency board in the event that the Titans don’t end up landing Clowney.

Note: I don’t include some of the Titans own unsigned free agents like Tajae Sharpe, Kamalei Correa, Austin Johnson, Wesley Woodyard, Daren Bates, LeShaun Sims, and Tye Smith. They could certainly still bring some of those guys back for depth roles.

Ryan needs no introduction for Titans fans. He’s smart, tough, a leader, and does all the little things that don’t necessarily show up on the stat sheet. There are plenty of reasons to want him back in Nashville.

The arguments against re-signing him are that he’s older for a corner at 29 and was never the most fleet of foot guy at his position. He’s reportedly set the floor at $10 million per year for his next contract.

Touched base with someone close to #Titans free agent CB Logan Ryan, one of the top players available. The versatile DB is open to entertaining all offers and will consider a short term deal. I’m told he won’t take less than $10M per year he earned last year.

However, he also got picked on a lot. No corner allowed more receiving yards on passes into his coverage than Ryan’s 940 per PFF. His lack of foot speed showed up in both games against the Chiefs, and while it’s fair to say that Tyreek Hill and Sammy Watkins are going to make a lot of corners look slow, the Titans have to be thinking that getting faster in the secondary might be a key to getting past Kansas City in the AFC over the next couple years.

The sneaky benefit to bringing Ryan back, even if it’s just a one year deal, is that the NFL is going to have shortened offseason workouts/practice schedules this year as a result of the coronavirus outbreak. Some have speculated that teams won’t get any OTAs or minicamps and will end up hitting the field together for the first time in training camp. That’s a unique challenge for coaches to get new players up to speed in new systems before Week 1. The Titans run a complicated defense that requires careful coordination on the back end. Returning all five starters in the secondary for the third year in a row would be a big advantage for Mike Vrabel’s defense.

If the Titans don’t land Clowney, you’d think Logan Ryan would be high on their wishlist.

The 29 year old edge rusher is coming off a nice season with the Giants where he tallied 10 sacks, 72 tackles, 13 tackles for loss, and 27 quarterback hits. It was a long awaited return to form for the former second round pick. Golden’s 12.5-sack season in his first season as a starter (second season as a pro) in 2016 showed that he had the potential for this kind of production. A torn ACL shortened his 2017 season with the Cardinals and then he struggled in his return season in 2018 before leaving in free agency for the New York.

Yes, the Titans already signed Vic Beasley to help bolster their roster at edge, but that doesn’t mean they’re necessarily out of the market at the position if the right player is available at the right price.

You really can’t have too many capable pass rushers in the NFL and behind Beasley and Harold Landry, the Titans have little in the way of proven talent. Derick Roberson flashed at the end of his rookie year and 2019 fifth round pick D’Andre Walker could turn into something, but I don’t know that those guys would keep me from continuing to add at this position.

At 6’-3” and 260 pounds, Golden sets the edge well in run defense in addition to his chops as a pass rusher. He could help supplement the parts of Beasley’s game that are lacking and give the Titans a different skill set at this position than what they currently have on the roster.

Golden will likely end up signing for less than Clowney, but he’s not going to be cheap necessarily.

The interest in Markus Golden is there. Price hasn’t been right to this point. But he’s willing to be patient. Giants among teams monitoring. After all, this is a player who had double-digit sacks. Was sixth in NFL w/27 QB hits + T-14th with 13 TFLs. Quality player on market.

His camp likely is waiting to see what Clowney does first. Hoping that teams who don’t get Clowney panic and offer more money than they currently have on the table to secure one of the few remaining impact pass rushers on the market.

If the Titans want a cheaper alternative to Logan Ryan, Robey-Coleman could be the answer. He’s 28 years old — one year younger than Ryan — and has spent the last three years as the Rams primary slot corner.

At 5’-8” and 180 pounds, NRC is probably best known for his infamous hit on Saints receiver Tommylee Lewis in the 2018 NFC Championship that ultimately made pass interference a reviewable call and helped send the Rams to the Super Bowl.

However, he’s also been one of the more effective slot corners in the league over the past few years. In 2019, he allowed just 39 catches on 62 targets (62.9%) for 362 yards (5.8 YPA) and a touchdown per PFF charting and notched his fourth straight season allowing a passer rating under 85 on throws into his coverage.

Robey-Coleman is a free agent because the Rams declined his $4.5 million option for 2020 in a relatively surprising move. LA is cap strapped and this provided some relief, but that’s a very cheap price tag for a starting level corner.

I’m not saying that NRC is a long term fix, or even a guaranteed starter, but he could give them an experienced player who has performed well in recent years as an inexpensive fallback option so they aren’t pigeonholed into taking an instant starter in the draft at this position (though they’ll need to make a heavy investment here either way).

After trading away Jurrell Casey to clear cap space, the Titans will need some more bodies on the interior defensive line for 2020. Jeffery Simmons and DaQuan Jones are your clear starters, but who joins them when they use three down fronts? Matt Dickerson, Joey Ivie, Isaiah Mack, and Amani Bledsoe are your current options on the roster, but those three have combined for exactly one NFL start.

Tennessee will almost certainly add a more experienced option to the defensive front and Wolfe is among the best available. He recorded 108 career starts for the Broncos over the last 8 years and is coming off a season where he notched a career high 7 sacks despite playing in just 12 games (due to two separate injuries, a high ankle sprain early in the season and a dislocated elbow that ended his year).

However, Wolfe’s game has never really been about generating big sack numbers though. He’s always been a solid run defender in Denver’s base defense who used his combination of power and quickness at 6’-5” and 285 pounds to beat blocks and generally be a thorn in an offense’s side. However, don’t underestimate his impact on the pass rush. Von Miller, his long time partner in crime on the left side of the Broncos defense, certainly doesn’t.

“As an outside person looking in, you may not see [what] Wolfe is doing to put both of them in position to make plays,” Bradley Chubb says, “but when you break down the film and you see how they work together, it’s very special to see. That’s the edge rusher’s dream, for sure.”

The Patriots are reportedly interested in Wolfe and it’s unclear how much he might end up commanding on the open market, but if I were the Titans I would be very interested in bringing him in to try to do for Harold Landry what he’s done for Miller all these years.

The running back market is brutal right now. Todd Gurley and Devonta Freeman got cut, Melvin Gordon ended up taking less money from the Broncos than what the Chargers offered him pre-holdout last year.

While Freeman would certainly be interesting given his previous production in a similar scheme and his connection to his former position coach in Atlanta, Keith Carter, on the Titans staff, I think DeAndre Washington is the back that I would pursue as a compliment to Derrick Henry if I was Jon Robinson. He’s a year younger than Freeman and has 838 fewer touches at the NFL level which means far more wear and tear. You’d also expect that he’d be much cheaper than Freeman, who likely would prefer an opportunity to split carries with a less established back than Henry anyway.

Washington has split the backup/third down back role in Oakland with Jalen Richard for years with pretty regular success and regularly grades out highly in pass protection, a key part of any third down back’s skill set. Like Freeman, Washington would also be coming from a similar scheme to the one that Arthur Smith employs in Tennessee so the learning curve should eased a bit.

Washington offers a sure set of hands, and at 5’-8” and 200 pounds, he’s got plenty of burst as a runner. He’s also played well enough to feel comfortable that he could get you through a game or two without Derrick Henry if the rushing champ were to go down with an injury.

The Titans are likely to draft a running back, but if Washington can be had for a relatively low investment, it makes a lot of sense to get a veteran who could provide a safety net behind Henry in case the rookie needs time to develop. It’s not unusual for rookie backs to be especially tough in pass protection early in their careers, so expecting to plug a draft pick into that third down role immediately might be a mistake.