The highest-profile non-quarterback free agent left on the market, Jadeveon Clowney remains in a holding pattern of sorts. The impact edge defender has been connected most closely to the Seahawks since becoming a free agent, but one of his original suitors engaged in discussions with him. 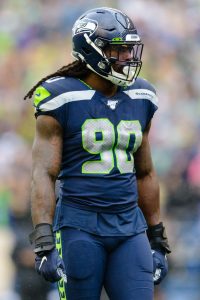 Linked to being prepared to make a strong offer for Clowney at free agency’s outset, the Titans have communicated with the former No. 1 overall pick, GM Jon Robinson confirmed Wednesday.

“We have touched based with Clowney’s representation,” Robinson said. “… Just trying to navigate and work through where that one might be.”

Clowney has gone from being a candidate to approach the Khalil Mack/$23MM-per-year pay range to hoping for $20MM annually — even on a one-year deal — to being favored to return to Seattle. But 11 days after a report indicated Clowney and the Seahawks were nearing a deal, he remains a free agent.

The Titans quickly added former Falcons first-rounder Vic Beasley, and the five-year veteran stands to team with Harold Landry on the edge in Tennessee. Clowney has been more consistent than Beasley, the latter’s 2016 All-Pro nod notwithstanding, but this coronavirus-altered offseason has likely affected his stock. Clowney has dealt with injuries for much of his career, though he is believed to be healthy now.

The former South Carolina phenom may now have better fits outside of Tennessee. Mike Vrabel, however, coached Clowney for four seasons in Houston. So, the Titans probably should not be discounted in this unusually paced race. Even with Derrick Henry‘s $10.3MM franchise tag factored into the equation, the Titans do still have more than $23MM in cap space.