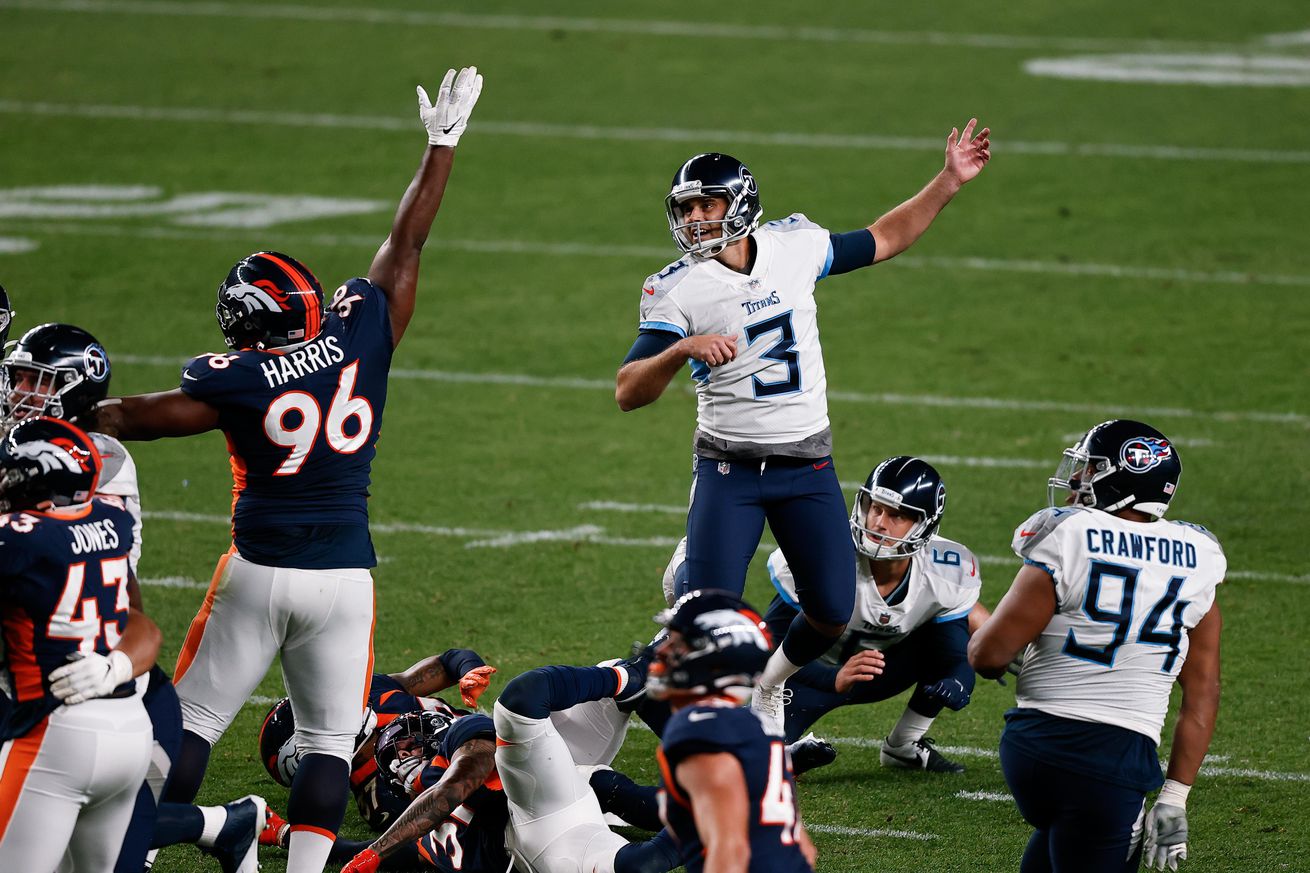 It was a pretty sloppy start in Denver as both teams took the field for live action for the first time in 2020, and it didn’t get much better as the night went on.

The Titans started the night with a false start and a delay of game, while the Broncos backed that up with a three and out of their own.

Stephen Gostkowski then misfired on his first field goal attempt as a Titan.

Then Rashaan Evans threw a punch and was ejected from the game.

Early on, the Titans couldn’t get out of their own way — and the Broncos took advantage. Drew Lock found Noah Fant to cap off a lengthy second drive to make it a 7-0 game.

Nothing was going right for Tennessee, until Melvin Gordon stepped him to help out. The free agent addition for Denver coughed up the ball on a screen, handing the Titans the ball at the Denver 20. Ryan Tannehill got the Titans on the board with a touchdown pass to MyCole Pruitt a few plays later, notching the score up at 7-7.

Jeffery Simmons came up with a massive key play on the goal line on the following drive, ending a drive that went all the way to the one yard line. It was a stand on 4th and 1 which preserved a tie score for the time being.

That moment set the Titans up with a chance to take control ahead of halftime, but another chance to put points on the board was wasted. Gostkowski had his kick blocked, keeping us tied at seven each.

Tennessee opened the second half with… you guessed it, another missed field goal. Gostkowski misfired again, keeping the game tied. So what could have been a 16-7 game, remained a 7-7 game.

All things considered, the defensive effort to this point was fantastic. Down two key starters, the Titans’ defense kept the team alive despite the lack of points. But then again, it wasn’t like the offense was struggling.

Tannehill once again was able to put together a long drive at the end of the third quarter, using Derrick Henry and Corey Davis once again. This time Tannehill converted on third down in the redzone, moving inside of the ten. It would take a fourth down attempt, but the tie was finally broken. Tannehill went play-action and found Jonnu Smith in the corner of the endzone to finally get back into the endzone.

However, Gostkowski missed the extra point. You can’t make this stuff up.

With 13:49 left in the fourth, the Tennessee lead was now 13-7. Drew Lock cooled significantly after a hot start, but a big run from Melvin Gordon gave the Broncos a spark. Lock quickly found Jerry Jeudy, then Tim Patrick. Suddenly, Denver had entered the redzone — and Gordon quickly cashed in. Brandon McManus made his extra point, giving the Broncos a 14-13 lead.

So a game that the Titans completely controlled was now in serious doubt, even more so after back to back three and outs. The defense gave Tannehill a couple of chances late, his final one coming with 3:05 remaining.

Tannehill found Davis, then Henry, then A.J. Brown all before the two-minute warning to get to midfield. A defensive pass interference call would creep the Titans in closer to — you guessed it — field goal range. But Vrabel wanted to skip that step, obviously. A Derrick Henry run got the Titans into the redzone with a little over a minute remaining. Henry crept closer to the goal line as the clock continued to bleed.

Fourth down brought on Gostkowski with 20 seconds left, but this time, he drilled it from 25 yards out. Stephen Gostkowski put the Titans back out in front 16-14 in the most ironic situation you’ll ever see.

With 17 seconds left, Lock had one more chance. It came down to a hail mary, but it fell incomplete. The Titans managed to win this one, despite three missed field goals and one missed extra point. It was a game that they should have won by ten, but Mike Vrabel will certainly take it.

Now let’s see what they do at the kicker position this week.

Tennessee heads home to face Jacksonville (1-0) for the home opener next week.