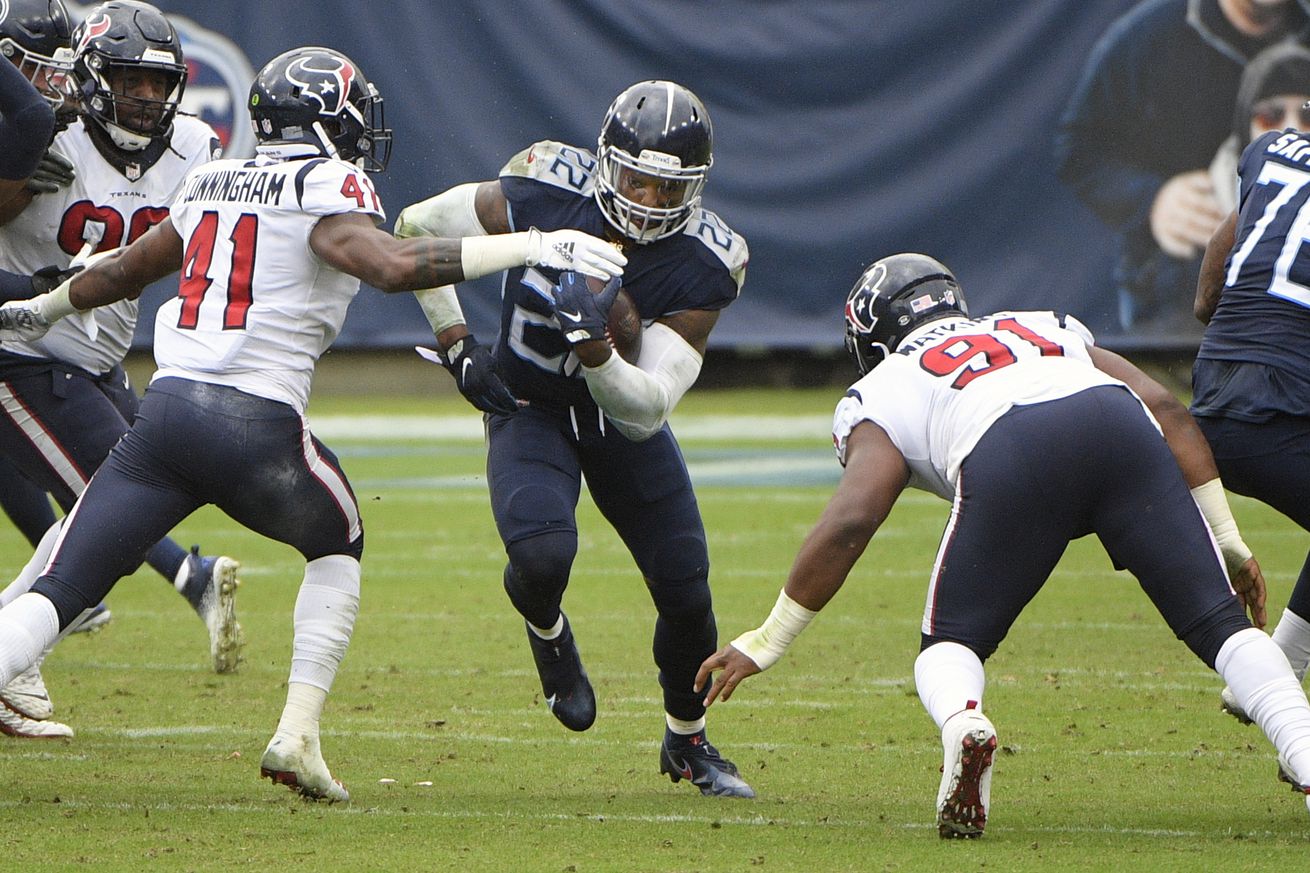 The Tennessee Titans were white hot, fresh off of a blowout win over the Bills. However, on a short week, it was going to be interesting to see how they responded. After starting out great, things fell apart in the second half — and then the Titans came roaring back to life.

Here’s how it all played out.

Part of the reason for Tennessee’s success lately is tied to Ryan Tannehill, who remained spot on to start this game against Houston. Two early touchdown passes powered the Titans to an early 14-0 lead. It was Anthony Firkser and A.J. Brown on the receiving end, while Derrick Henry chewed up yardage in between the 20s.

As quickly as Deshaun Watson was able to find an answer of his own to Darren Fells, Tannehill and Henry were able to get another drive going. Tannehill quickly re-established a 14 point advantage, finding Adam Humphries streaking down the sideline on his way to the endzone. It was the third touchdown pass of the day for Tannehill to that point.

Watson was able to get into field goal range before halftime, cutting the lead down to 21-10.

The Titans came out ready to add to the lead to start the third quarter, but their drive stalled in the redzone. Stephen Gostkowski’s kick was blocked, giving the Texans a shot to get back in this game. A big play to Darren Fells flipped the field, while David Johnson was able to punch it in on the goal line.

J.J. Watt changed the game on the next drive. He got home for a sack and forced a Tannehill fumble, which the Texans recovered. Suddenly Watson was in business on the Tennessee five, looking to take the lead.

After two failed rushing attempts, Watson found Randall Cobb at the pylon for the touchdown. However, Ka’imi Fairbairn missed the extra point.

Our new score late in the third quarter: Texans 23, Titans 21.

Now faced with some adversity, the Titans needed an offensive answer. Tannehill got the ball rolling with Anthony Firkser, then Jeremy McNichols busted off a run for another chunk. But that’s where the progress ended — and then Gostkowski misfired on a field goal as the fourth quarter began.

Needing a stop, the Titans defense came through. It was Jadeveon Clowney and Jeffery Simmons ending Houston’s drive at midfield, but a good punt forced Tannehill and company to start at their own five.

And then Derrick Henry happened. He finally got free and ripped of a big one, going 95 yards to the house. Tannehill converted the 2 point conversion after that, putting the Titans back in front at 29-23.

However, Watson immediately answered. It was a bomb to Will Fuller, who got behind the Tennessee secondary to retake the lead at 30-29.

With 8:37 to play, Tannehill was picked off on a deep ball to Kalif Raymond. Bradley Roby went right over the top of Raymond, making a potentially game-changing play.

Watson went back to work, using Fuller and Brandin Cooks in the short passing game. They moved past midfield and were quickly faced with a fourth and one — which they went for and converted.

With the clock bleeding, Houston kept it on the ground with David Johnson. Just past the two-minute warning, the Titans stuffed them at the goal line to force a fourth down. Once again, Romeo Crennel went for it — and Watson found Cooks for another touchdown. Tennessee did stop the two point attempt, but were now down seven points with 1:50 to play.

Tannehill quickly went to work. He found Humphries twice, then Firkser for a big gain. In just a few plays, the Titans were in striking distance, inside of the redzone. Tannehill had 23 seconds to work with, down 36-29 from the Houston 16.

A short pass to McNichols set up a couple of final chances, but Tannehill needed just one. A.J. Brown hauled in a fade in the corner of the endzone, snagging it over the head of Roby. Vrabel opted to attempt to tie the game up and kick the extra point, which Gostkowski nailed.

The Titans got the ball first to open the 10 minute overtime period, and were immediately in business after a Derrick Henry checkdown pass flipped the field. McNichols made another big run on the next play, placing Tennessee in the redzone on the ten.

On third down, Derrick Henry punched it in for the win out of the wildcat formation.

THE KING PUTTING THE TEAM ON HIS BACK! @KingHenry_2

So the Titans moved to 5-0 in an absolutely insane game of football. The Titans racked up over 600 yards of total offense today, somehow finding a way to win.

Tennessee is back in action next week at home against the Steelers.