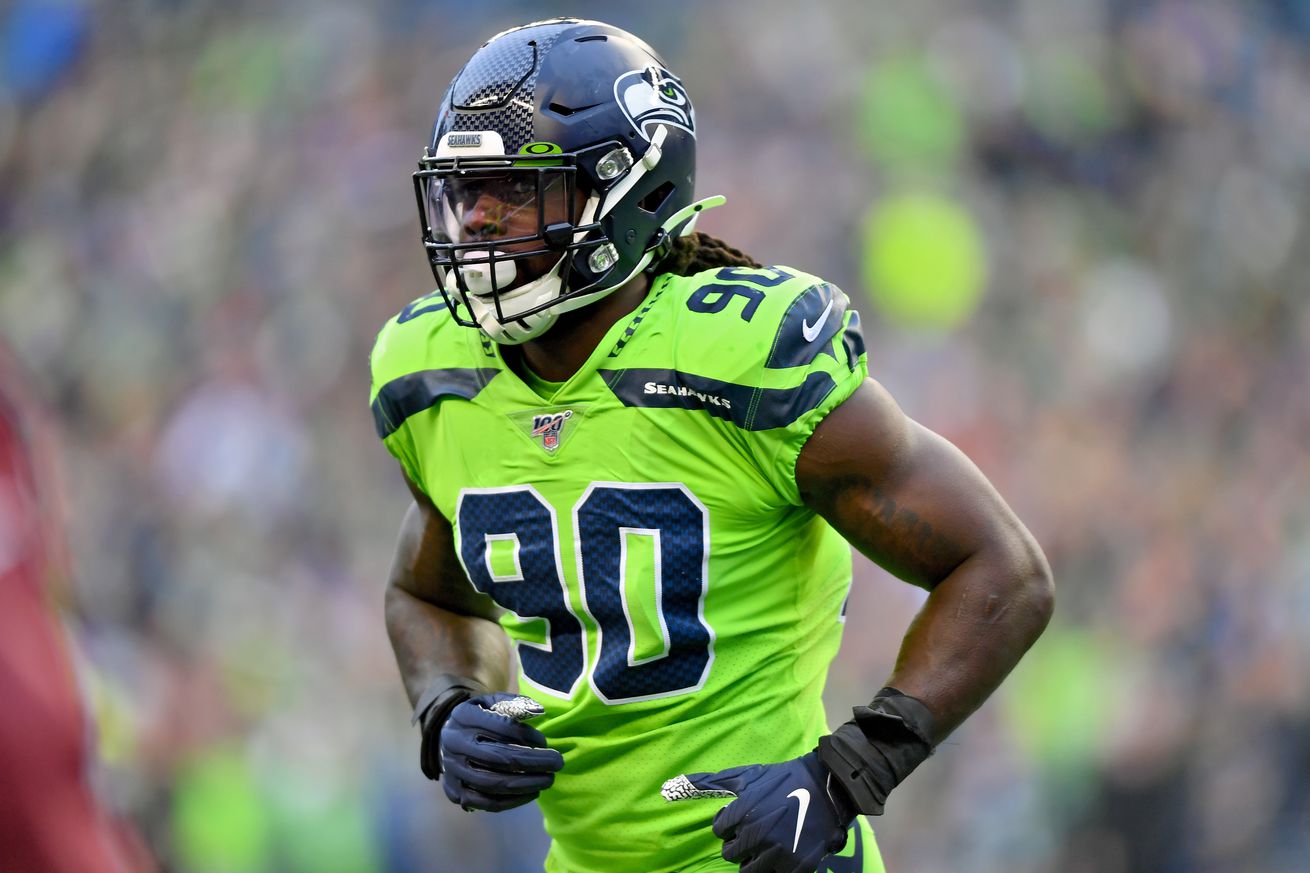 Is this where Jon Robinson plans to spend his newfound cap space?

The Titans have been connected to Jadeveon Clowney — the biggest remaining free agent prize on the market — throughout the free agency process, but there has been little insight to recent developments since the negotiation period opened until now.

Gregg Bell of the Seattle News Tribune is reporting that Clowney is weighing multiple offers and that it is believed that the Titans are one of three teams that are in the chase.

Seattle began Thursday the way it began Wednesday, Tuesday, the week, the month—heck, the offseason: waiting for Clowney to decide if he wants to stay or go. The three-time Pro Bowl edge rusher has been weighing offers from multiple teams, believed to include the New York Jets and Tennessee Titans, in addition to the Seahawks.

Bell goes on to say that he still expects the Seahawks to be the favorite to re-sign the dynamic Clowney, citing a comfort level with Seattle that the other teams can’t offer. However, that’s not necessarily true. Clowney spent his first five seasons with the Texans with Mike Vrabel serving as his position coach for three years before being promoted to defensive coordinator for one.

That one season with Vrabel in charge of the Texans defense was the best year of Clowney’s career. He posted 9.5 sacks, 59 tackles, 21 tackles for loss, and 21 QB hits, all career highs, as Vrabel used him as a movable chess piece in the Houston defense. Clowney’s versatility was on full display as he lined up on the edge, along the defensive line, and even had some snaps as an off ball linebacker at times.

Vrabel and Clowney were close during their time together with Clowney calling the Titans head coach “the smartest coach he’s ever played for”.

The mutual respect has continued after Vrabel’s departure as well.

Vrabel also wouldn’t be the only Titans coach that Clowney has a history with. His position coach in Tennessee would be Shane Bowen, who worked in Houston as a defensive assistant for two years before following Vrabel to the Titans.

This wouldn’t be a big adjustment for Clowney from a scheme/terminology standpoint either. Vrabel frequently refers to “our scheme” when referencing the defense that long time Texans defensive coordinator Romeo Crennel installed in Houston and that Vrabel imported to Tennessee in 2018. That was part of his reasoning for hiring Anthony Midget away from Houston to serve as Kerry Coombs’ replacement as defensive backs coach.

Clowney is also from this region of the country, growing up and attending college in South Carolina. Nashville isn’t exactly Columbia, SC, but it’s a whole lot closer to where he grew up than Seattle or New York. That may not matter at all to Clowney, who has publicly stated that he wants to play for a winner first and foremost, but it certainly would seem to add to the comfort factor if that’s going to play a role.

Another factor that could fall in Tennessee’s favor? I would have to think that the prospect of beating up on Bill O’Brien — the guy that ran him out of town last summer — twice a year would be an attractive idea to Clowney. O’Brien has reportedly grated on several Texans during his tenure as head coach, including DeAndre Hopkins and — hilariously — the Texans salary cap guy according to reports.

Been hearing that Kevin Krajcovic – #Texans Cap guy after the firing of Chris Olsen (for no good reason) – cant stand Bill OBrien and wants out. Team begging him to stay. (need cap guy for FA season) #TeamDysfunction

If it comes down to cold hard cash as these things often do, the Titans land right in the middle when it comes to available cap space. The Jets currently show $37.6 million in available space per Spotrac, but that does not include cap charges for recent reported signings Connor McGovern (three years, $27 million) and Brian Poole (one year, $5 million). After you remove the expected numbers for those guys, New York should have around $26 to $27 million remaining.

The Titans check in at $36.3 million, but that number doesn’t include Vic Beasley’s $9.5 million expected cap charge. I would say it’s safe to assume the Titans “real” number is around $26.8 million.

The Seahawks are much tighter against the cap. Spotrac shows $20.4 million in space, but that’s without factoring in new contracts for Bruce Irvin (unknown contract), Cedric Ogbuehi (one year, $3.3 million), Brandon Shell (two years, $11 million), and Luke Willson (unknown contract). We don’t really know where Seattle’s “real” number is, but it’s significantly lower than either the Titans or Jets.

It’s also worth noting, as Two Tone Blue Nation mentioned on Twitter, that Tennessee would offer a much lower state income tax rate than Washington or New York so the Titans cap dollars go just a little bit further than those teams when it comes to getting into the player’s pockets.

One thing not mentioned was state income taxes?

New York gets one game vs Miami.

TN plays in Texas and Florida giving them 10 guaranteed games a year without tax. https://t.co/gVfdewxvQ5

The reports over the last couple days have pointed to Clowney’s market being “disappointing” to the veteran pass rusher and that he’s now considering a potential short term deal to get back into the market before he turns 30.

As Jadeveon Clowney continues to wait, I’m told he’s considering options, including a potential shorter term deal w/ a chance to re-enter market in a year or two. Many people around league expect him back in Seattle. A $20M price tag has been steep for teams, per @diannaESPN

It’s been consistently reported that teams are unwilling to match his $20 million per year asking price so the question now is where the actual offers are lining up. Could you get Clowney for a two year, $35 million deal? I think that’s something that would have to be pretty interesting for Jon Robinson at this point.

The Titans must have some plan for a spend after moving Jurrell Casey out yesterday. This seems to be the rumor that is producing the most smoke at the moment.