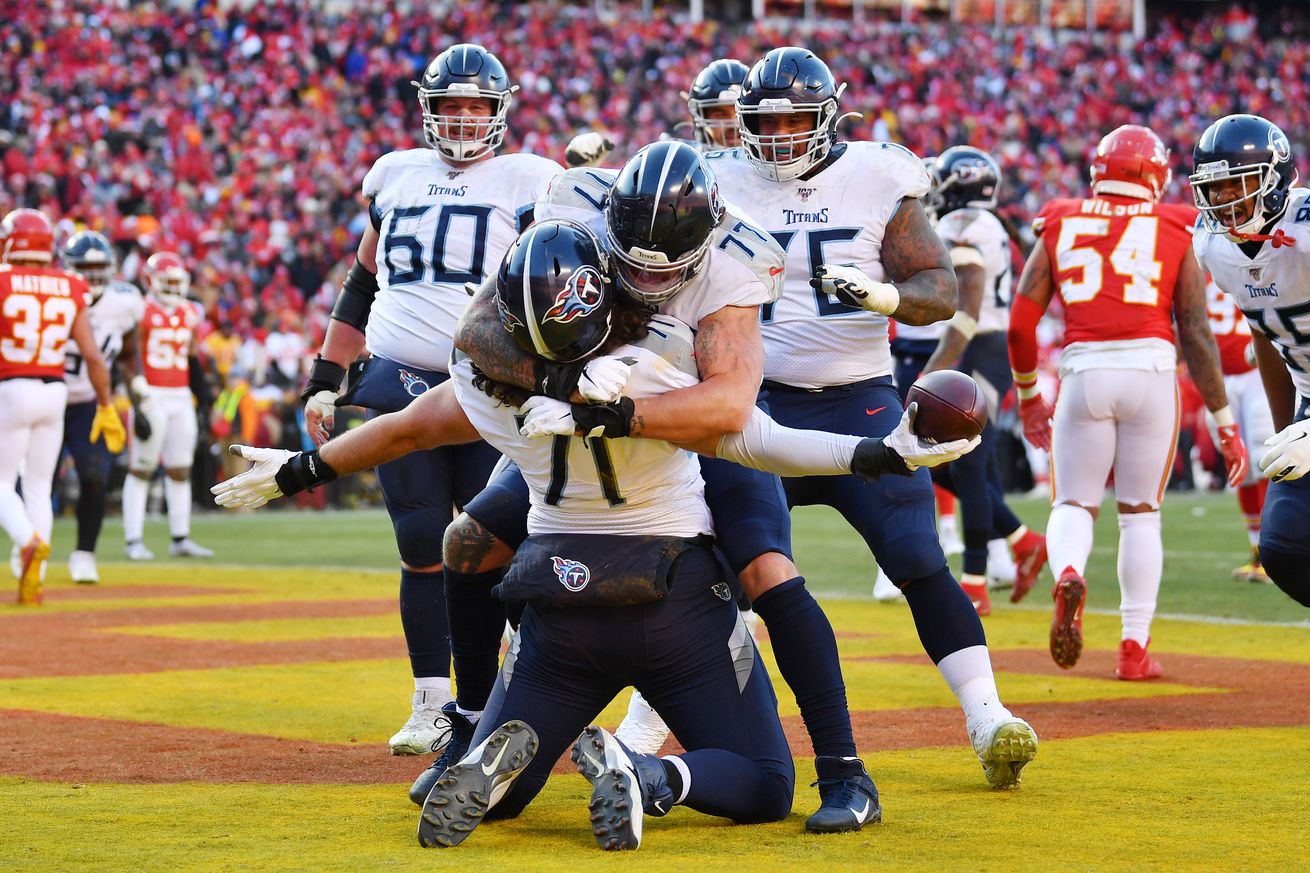 Derrick Henry gets the tag, Undertaker takes over at right tackle, and more.

The first day of NFL free agency was wild, and after days of zero sports news, it was a welcome change of pace. It’s important to note that none of these moves for outside free agents can become “official” until Wednesday at 3:00 PM CT when the new league year starts. Most of the time deals go through, but every now and then you get an Anthony Barr situation where a player gets cold feet and changes his mind. It’s rare, but it happens.

That said, let’s run down some thoughts on the moves that impacted the Titans yesterday.

Derrick Henry gets the franchise tag

We knew this was a possibility for sure, but I’m just slightly surprised that the Titans didn’t get a long term deal done with King Henry. It certainly sounded like they wanted to work something out, but obviously the two sides weren’t able to agree by the deadline so the team tagged him to make sure he wasn’t going anywhere.

The Titans and Henry have until July 15th to work something out. If they don’t, Henry will have to choose whether to play on the tag or holdout.

I personally think that there is a relatively low chance of Henry holding out. He’s only made $5.4 million total off his rookie contract so $10.2 million for one season is still quite a bit of money for a young guy. Holdouts haven’t been terribly effective for guys like Le’Veon Bell and Melvin Gordon in recent years, but Ezekiel Elliott’s trip to Cabo did end up paying off for him.

From the Titans perspective, Henry playing on the tag is the ideal situation as long as he doesn’t decide to hold out. They get another year of his prime without any long term risk attached if the heavy workload catches up to Henry like it has so many of his contemporaries.

At the end of the day we should all be happy that Henry is back in two-tone blue for another year.

Undertaker takes over at right tackle

Two moves combined here as Jack Conklin signed with the Browns for three years, $42 million with $30 million guaranteed. The total numbers are less than what I expected, but Conklin gets $20 million of that in year one so it’s a nice payday for him and it would have been tough for the Titans to match that structure and still get other work done in free agency.

Kelly was re-signed shortly after for three years, $21 million with $8.75 million guaranteed, making him the Titans new starting right tackle after four years of service as a high quality swing tackle.

The logic here is pretty clear from the team. They can pay Dennis Kelly half of what Jack Conklin got for play that isn’t a huge step down from what they were getting before. Kelly has four years of experience with this team and has always played better at right tackle than he has on the left side when pressed into action. In the second half of 2018, his longest extended run of starts, he performed like an above average starting tackle. If the Titans can get that from Kelly for $7 million a year and also get a chance to take advantage of a great draft class of tackles coming out this year, that’s a win-win.

The Titans will also be slated to pick up a compensatory pick in the 2021 NFL Draft in return for Jack Conklin walking as long as they don’t go out and spend big money on an outside free agent from another team. That pick will likely be a third rounder.

Mariota is signing with the Raiders and expected to go back up Derek Carr in Las Vegas. Terms of the deal are not yet available, but Titans fans should be hoping for big numbers for compensatory pick purposes.

The former second overall pick will ultimately go down as one of the most complicated Titans of all time. Did he live up to his draft billing? Absolutely not. Did he also help pull this franchise out of the sewers and into respectability? Yes. Both those things can be true.

Mariota will be hoping to get a chance to do to Carr what Tannehill did to him this year, but let’s take a moment to pour one out for the 2015 draft class, Ruston Webster’s last draft (mercifully) as Titans GM:

Just five years later you have more XFL players (3) than NFL players (2) and more guys out of football altogether (4) than playing in either league. The two guys who have stuck at the top level are a backup defensive lineman who has never amounted to much and a backup quarterback, neither guy remains on the Titans today and only one finished his rookie contract here.

The fact that the Titans roster is in good shape despite an absolute black hole left in the middle of it by this draft class is a testament to the work Jon Robinson has done as GM since 2016.

It was and is a truly baffling trade. To make a deal where you send away a top five receiver and don’t even get a first round pick back is malpractice. The Vikings traded Stefon Diggs, a very good receiver in his own right but nowhere near Hopkins’ class, later in the day for first, fifth, and sixth round picks in 2020 plus a fourth rounder in 2021.

The move makes no sense on any level for Houston. Just a few months ago there was speculation that Johnson might get cut just to get the Cardinals out from under his onerous contract. He hasn’t surpassed even 3.7 yards per carry since 2016 and has had a laundry list of injuries to deal with over that time. Arizona traded for Kenyan Drake to replace him last year.

Also, don’t forget that the Texans traded a third round pick for Duke Johnson less than a year ago. Saying that Bill O’Brien doesn’t appear to have a plan is giving him too much credit.

The Titans have seen Andrew Luck, DeAndre Hopkins, and Calais Campbell — arguably the three biggest thorns in their side over the last few years — leave the division over the last eight months.

What to watch for today

The Titans still have somewhere around $23-24 million left in cap space to work with and I feel like there is still a big move on defense out there for them to make. They could also still create a little more wiggle room if they want by restructuring deals for Jurrell Casey, DaQuan Jones, and Malcolm Butler.

It’s also important to remember that the first year cap hit is going to be lower than the average salary per season numbers when it comes to these deals. So while the Titans have just $23-24 million in space, they could still sign a $20 million a year player who would have a first year cap hit of just $12-14 million. There is more flexibility left than you might think.

Logan Ryan’s free agency remains quiet for now, but with Byron Jones getting huge money from Miami, I’d expect his market to heat up today. The Titans might still want to get him back, but we will see.

The team also reportedly has at least some interest in bringing back MyCole Pruitt, Tajae Sharpe, and Kamalei Correa so we could see some smaller deals given out to their own guys.

Then you have the big fish left in the edge rusher pond headlined by Jadeveon Clowney and Dante Fowler. Other guys like Markus Golden and Robert Quinn could also be pretty attractive options at a slightly lower cost.

So will the Titans make a big splash or will they quietly re-sign their own? We should find out pretty soon.