The dust has settled with the 2022 NFL draft in the rearview mirror and free agency leading up to training camp figures to be mostly minor transactions.

The Tennessee Titans have certainly had an offseason. After releasing several players to free up salary cap space, the Titans shockingly traded A.J. Brown to the Philadelphia Eagles during the draft after the two sides did not appear to be close on a contract extension.

Going into the offseason, the main focus was surrounding quarterback Ryan Tannehill with more talent after an injury-plagued season saw the Titans signal-caller without his top two targets in Brown and Julio Jones for long stretches of time.

However, after releasing Jones and trading Brown, the Titans appear to have more questions than answers in that department. As such, they sit at No. 12 in the NFL power rankings of NBC Sports’ Peter King, who noted similar concerns surrounding Tannehill.

What we have here is a failure to … well, have offensive competency in the big spots. And this season, without question, will be a referendum on the future of Ryan Tannehill to quarterback an NFL contender. In his last two playoff games, both in Nashville, Tannehill has led the Titans to two losses and a total of 29 points. Last season, in 18 games, Tennessee managed to win AFC home-field (largely because the rest of the division was a tawdry 16-35 and never challenged the Titans), but Tannehill had a crummy 22-to-17 TD-to-pick ratio. How he’s going to be better without A.J. Brown, I have no idea. I can’t figure this team out, but I do know Mike Vrabel is worth at least what he’s making in his new contract. This defense plays with the kind of intensity and efficiency their coach used to have as a player. The Titans will need that this year.

In King’s power rankings, he has AFC teams like the Buffalo Bills (1), Los Angeles Chargers (2), Kansas City Chiefs (3), Cincinnati Bengals (7) and Baltimore Ravens (8) ahead of Tennessee.

Given the offseason moves, the Eagles rightfully land at No. 9 on his list. He’s not as high on Indianapolis, putting the Colts at No. 21 despite the addition of quarterback Matt Ryan.

After moving up in the draft, the Titans added a potential superstar wide receiver in Treylon Burks. However, he doesn’t have Brown’s track record, one that saw the 24-year-old put up back-to-back 1,000- yard seasons.

Austin Hooper appears to be a significant upgrade at the tight end position, and the Titans will also have a healthy Derrick Henry back in the fold next year.

Robert Woods was brought over to bolster the wide receiver position, a move that looms larger than ever. It appears the USC product is on schedule in his recovery from a torn ACL after he participated in Day 1 of OTAs.

Tennessee’s bread and butter figures to once again be the defense, a unit that took a monumental leap forward in 2021 after a subpar 2020 campaign.

If history has lent itself anything, Vrabel always gets the most out of his ballclub.

There are questions at the receiver position going into the year, but hopefully, Burks, Woods, Nick Westbrook-Ikhine, Dez Fitzpatrick and draft pick Kyle Philips can put those issues to bed. 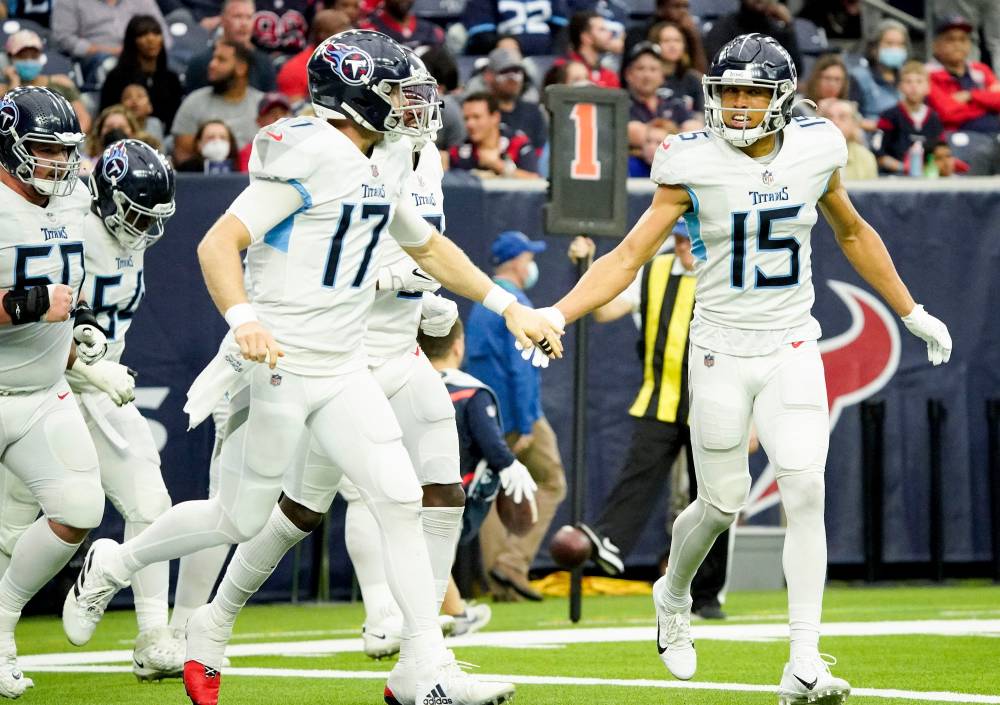