Tennessee Titans outside linebacker Rashad Weaver had a fair amount of hype surrounding him entering the 2021 campaign after flashing some dominance in a preseason contest against the Atlanta Falcons.

Weaver was the story of the game, tallying 1.5 sacks in a 23-3 win over the Falcons in Atlanta. Despite not doing much else during the preseason, that game alone gave hope Weaver would be an impact player in his first season.

However, it was not to be.

Weaver, who was inactive in Week 1 before playing sparingly in Week 2, suffered a broken fibula in Week 3 that required surgery and ended his campaign.

While the Pittsburgh product wasn’t able to do much physically as he rehabbed from his injury, outside linebackers coach Ryan Crow noted Weaver “became a student of the game” with his spare time.

“He became a student of the game,” Crow said of Weaver, via Jim Wyatt of Titans Online. “We stayed in touch, and he was in and out of the building and we were able to watch cut-ups and send him cut-ups and just talk through some things. It was actually very beneficial because some of the stuff that’s not scheme-related, not talking about game plan, just stuff that he can focus on kind of as a young player of how to develop that he’s brought now that he’s back on the field.”

“He had a little bit of playing time, that’s always invaluable,” Crow added. “But when he went back and he was rehabbing and doing that stuff, he kept fresh and learned and watched a lot of film and just studied it from kind of an outsider’s prospective. And now he’s translating it to when he’s on the field.”

Crow praised Weaver’s work ethic and noted how he’s improving. He also gave insight into what Weaver needs to work on.

“We went through the tough deal with the injury, and that was hard for him, especially early in the season,” Crow said. “But he is a grinder; he works really hard. Excited to see where he goes. It’s good to have him back out here, and he’s improving. He’s feeling better about himself and just his mental and physical state, and he’s good to be back on the field and we’re excited to have him.

“The biggest thing for him is getting his pads down. He is a tall human being and those guys always struggle with pad level. That’s his No. 1 thing this spring is just to get his hands rock-steady and get his pad level down.

A quick peek at @RashadWeaver in Tuesday’s @Titans OTA. pic.twitter.com/ZlaGKXZ7HZ

Weaver is a lock to make Tennessee’s 53-man roster, but his role is anything but certain.

The 2021 fourth-round pick is behind Bud Dupree and Harold Landry in the pecking order, and he’ll have to compete for snaps with Ola Adeniyi, who played well in limited opportunities on defense last season.

For now, it looks like Weaver is set to play a backup and special teams role, but there is an avenue for him to have a very significant role on defense if Dupree struggles once again in his second season in Nashville.

Titans’ Dillon Radunz: ‘It’s nice to focus on one position’ 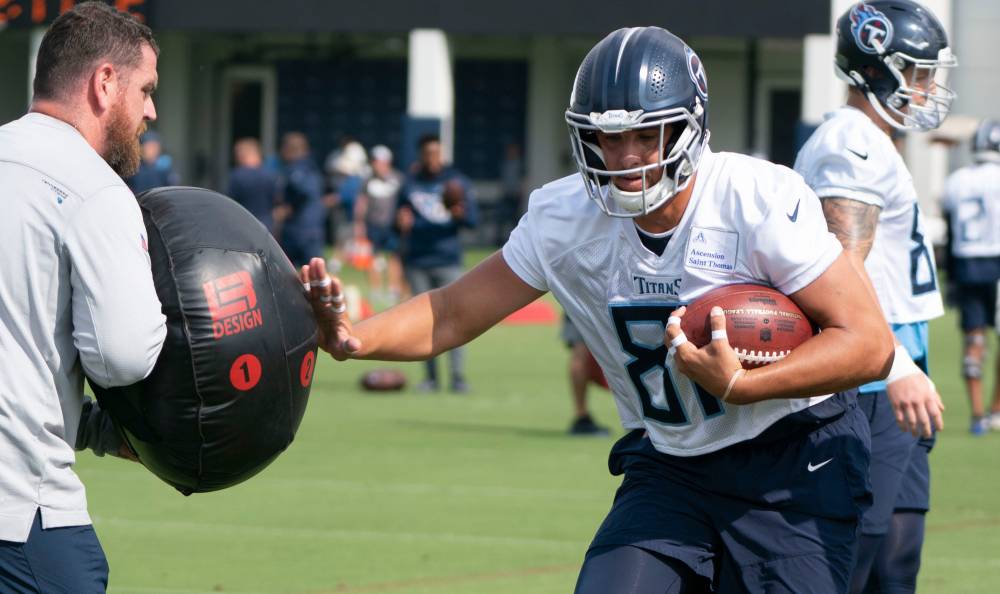