Delanie Walker‘s lengthy Titans tenure will end after seven seasons. The team announced the release of its longtime tight end. 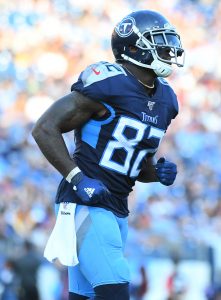 The 35-year-old target had battled injuries in recent seasons but wraps up his Tennessee stay with three Pro Bowls on his resume. Injuries limited Walker to just eight games over the past two seasons, however, and it’s fair to wonder if this will be it for the 14-year veteran. For what it’s worth, Walker said in December he planned to play a 15th season in 2020.

While Walker’s work decreased in recent years, he was one of the league’s premier tight ends for an extended stretch. After leaving his post as Vernon Davis‘ backup in San Francisco, Walker thrived after signing with Tennessee. From 2014-17, he posted four straight 800-plus-yard seasons.

Tennessee used Jonnu Smith as its primary receiving tight end last season and received some contributions from Anthony Firkser as well. They combined for more than 600 yards and look to be the players tasked with succeeding Walker going into the 2020s.

This move will create more than $6MM in cap space for the Titans, who opened $2MM earlier Friday by releasing Ryan Succop. Tennessee has not re-signed Ryan Tannehill, Derrick Henry or Jack Conklin. The Titans are running out of time but are now north of $66MM in cap space. Only a handful of teams possess more.