Julio Jones will be in uniform for the Titans tomorrow when they take on the Jaguars. According to NFL Network’s Ian Rapoport (via Twitter), the Titans plan to activate the veteran wide receiver off injured reserve. Jones returned to practice earlier this week. 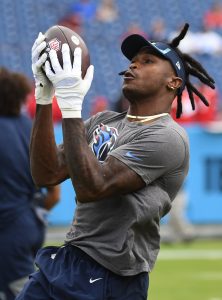 A hamstring injury has limited Jones to just six games so far this season. Last month, the Titans moved to place him on IR, freeing up an additional roster spot for a few weeks. Jones missed time in previous seasons with a hamstring ailment, as well. Fortunately, Rapoport says Jones’ latest hamstring injury “has healed.”

Jones was limited to only nine games and 771 yards in 2020, but he was a 1,000-yard receiver as recently as 2019 (when he was a second-team All-Pro after finishing with 99 receptions for 1,394 yards and six touchdowns). So, the Titans were naturally expecting big things this past offseason when they acquired Jones (along with a sixth-round pick) from the Falcons for a second-round pick and a future fourth-round pick. However, in the veteran’s six games this season, he’s averaging only 56 receiving yards per game, a major dip from his previous career-low (73.8 yards during his rookie campaign in 2011).

Still, Jones will be welcomed back with open arms by a Titans offense that had to go without Jones, A.J. Brown, and Derrick Henry in their most recent loss to the Patriots.