The Titans are moving on from Dion Lewis. The running back has been released from his contract, according to NFL.com’s Ian Rapoport (on Twitter). 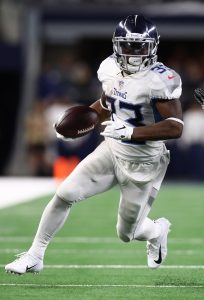 This was an expected move. The Titans are intent on bringing Derrick Henry back, either with a tag or a brand new deal to keep him from free agency.

Lewis, meanwhile, is no longer worth the remainder of the four-year, $20MM deal he signed with the team in the 2018 offseason. After averaging 5.0 yards per carry in the Patriots’ varied backfield, he’s averaged just 3.5 yards per tote for the Titans across the last two seasons with an increasingly smaller role. Last year, he appeared in every game, but carried the ball just 54 times for 209 yards.

Henry, meanwhile, has been sensational. Last year, he turned in a 1,540-yard season – that’s not counting his 446 postseason rushing yards, the most by any player whose team did not reach the a Super Bowl.