Ryan Succop‘s six-season Titans run will wrap up with a release. The Titans will move on from their longtime specialist, according to TitansOnline.com’s Terry McCormick (on Twitter). 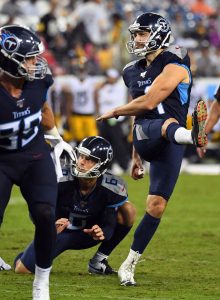 This move will produce more dead money than cap savings ($2.1MM/$2MM), but Succop struggled last season for a Titans team that largely made its late-season push without the assistance of the field goal component.

Succop, 33, made just 1 of 6 field goal tries after coming off IR midway through last season. He did not kick in the playoffs for the Titans, who were set to pay him $3.4MM in 2020. The Titans placed Succop on IR for a second time in 2019, ending his season in December.

Tennessee signed ex-Cleveland kicker Greg Joseph to a three-year extension and used him in the playoffs, so some large writing was on the wall for Succop with the Titans. A knee injury initially sent Succop to IR in August, and he never re-established his usual form prior to IR trip No. 2.

The former Chief, however, made at least 86% of his field goal tries in four of his six Titans seasons and has 10 years’ experience. This will be Succop’s second stay in free agency. The Chiefs cut him 2014, pivoting to Cairo Santos. Succop quickly landed with the Titans, with whom he signed two contracts.