Plenty of eyes are on rookie receiver Treylon Burks heading into the 2022 season, due to the inevitable links between himself and A.J. Brown. Things haven’t gotten off to the best of starts so far in Burks’ young career, though. 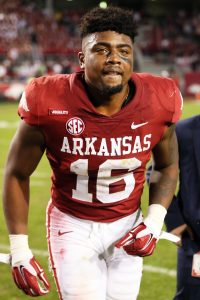 Asthma problems cost the Arkansas alum practice time during OTAs, then a separate, unspecified issue led to him missing all of the Titans’ minicamp. That raised questions about Burks’ weight and conditioning, but the team stressed that he was still making progress in getting acclimated to the NFL and specifics of their playbook. He should be able to see the field later this month.

WRs coach Rob Moore has “no doubt” that Burks will be available at the start of training camp, as noted by ESPN’s Turron Davenport. That would of course be a welcomed development, since he is in line to start right away for a Titans team which no longer features Brown or Julio Jones. Robert Woods will also play a large role in the team’s passing game, though he is recovering from a torn ACL. Development will therefore be critical for Burks in both the short and long term, as the Titans look to repeat last season’s success.

Given his track record as one of the SEC’s most productive – and most unique – talents, Burks was understandably one of the top wideouts taken in the draft. His run-after-catch ability will likely be his calling card in the early portion of his NFL career in particular, but fine-tuning the rest of his skillset will of course be crucial in the build-up to the season.

“I’m just taking it one day at a time and everything else will take care of itself,” Burks said. “Everybody is going to have setbacks. It’s just how you come back and attack it.” The progress he makes in the coming weeks could go a long way to dictating his own, and Tennessee’s, success in a campaign once again filled with significant expectations.