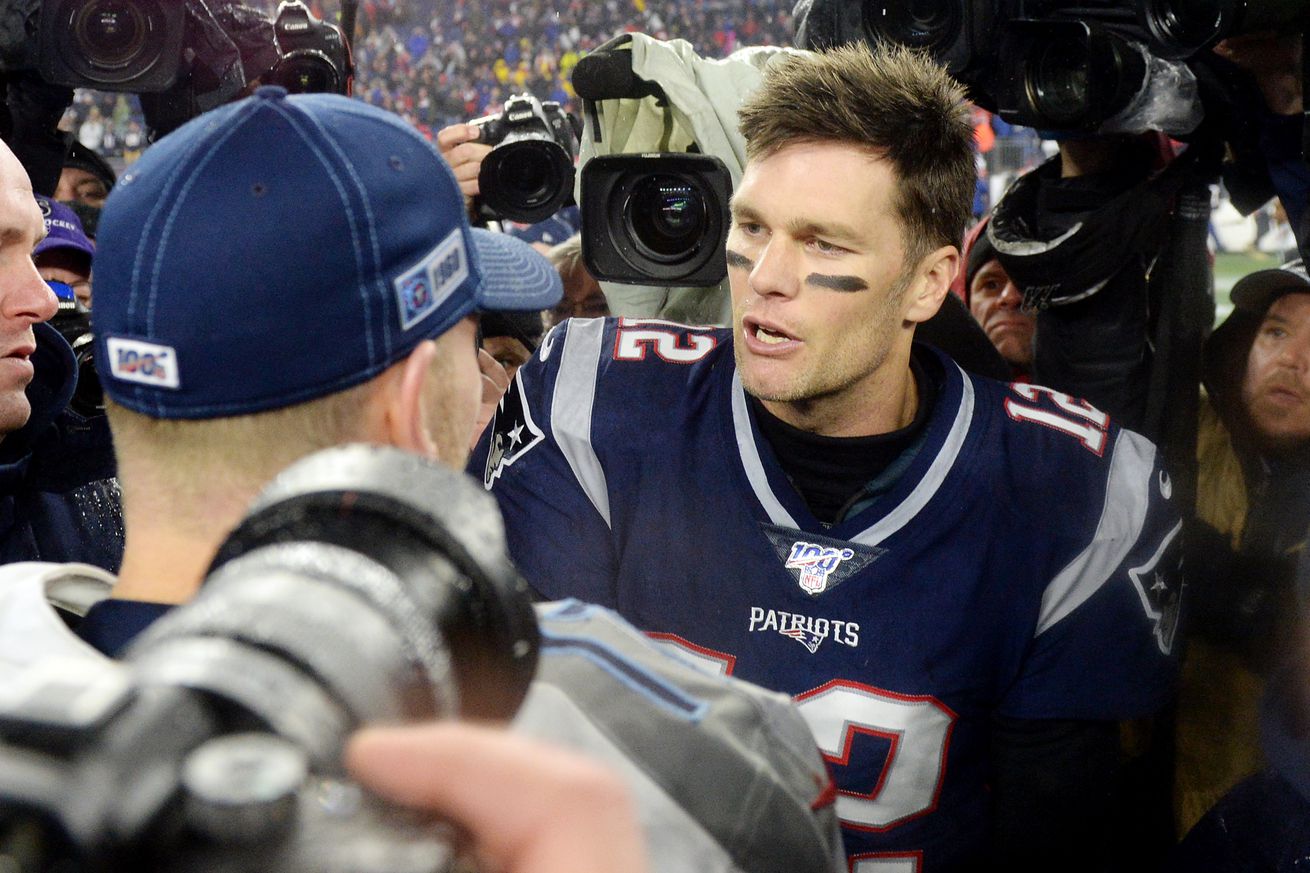 Taking one last look at the debate that has defined the Titans 2020 offseason before actual news begins to filter out next week.

It’s the single question that has come to define the Titans 2020 offseason. You can’t turn on sports talk radio, open Twitter, or go to the grocery store without hearing or seeing this debate playing out in one of it’s many forms.

As is true with many either/or questions, most Titans fans have chosen a side — I’m a Tannehill guy myself — and taken to defending that stance by promoting “their guy” and running down the other quarterback like he’s some sort of grotesque Blake Bortles clone. Zooming out you can see this phenomenon at play in other sports and outside of the sports realm altogether, so this certainly isn’t just a Titans fan thing, it’s a human thing, but I digress.

The truth doesn’t fit into the debate format that dominates sports talk shows in 2020, but it’s worth getting on the record before we find out which side gets “their guy” under center this fall… the Titans are going to be in good shape either way.

Think about it. The Tennessee Titans — the franchise that hadn’t had a top 13 scoring offense since 2003 until last season — is going to end up with either a Pro Bowl quarterback who just led the NFL in passer rating and yards per attempt while leading a top five offense or the greatest quarterback of all time who helped lead his team to a Super Bowl win just 13 months ago. Those are two pretty great options in the grand scheme of things and given where this team was at quarterback at the end of 2018, it has to be considered a pretty great result even before we know who the choice will be.

So let’s run down the final arguments for both sides one last time.

Why the Titans should run it back with Ryan Tannehill…

This argument is topped by what we saw after Tannehill took over the offense:

We’ve seen most of those numbers a million times, but it’s worth reminding that this wasn’t just a nice run of play… this was a historically significant stretch of ultra-efficient offensive production. Regression from this rate is almost inevitable, but when you look at the other teams that have put up this kind of run, specifically when it comes to the yards per offensive play rates, you find squads that had staying power:

My point? It’s hard to fluke your way onto this list. All of these teams had sustained runs of offensive success around a core group of players. So are the Tannehill Titans the first team to truly luck into run like this? Or do they have the potential to become one of the memorable offenses that you can recall vividly like the other five listed above?

If you believe there is even a reasonable chance that could be the case, you have to find out, right? Even if you concede that statistical regression is likely — and it certainly is — it takes a lot of regression to go from where the Titans were under Tannehill in 2019 to anything outside of the top ten offenses in the league.

There seems to be a segment of fans that is certain that Tannehill will go back to “Miami Tannehill” next season. To some degree, I can understand the fear. After all, we’ve seen six seasons of “Miami Tannehill” versus just ten games plus three playoff games for “Tennessee Tannehill”.

However, there are a couple issues that I take with this argument. First, “Miami Tannehill” wasn’t that bad. He went 42-46 as a starter with a 62.8% completion percentage, averaged 232.2 yards per game, 7.0 yards per attempt, 20.5 TDs per year, and 12.5 INTs per year on a team that, I think it’s fair to say, didn’t exactly surround him with great coaching and talent.

That’s not what you want necessarily — especially if we’re talking about a contract with close to a $30 million per year price tag — but it’s also not as bad as many like to paint Tannehill’s run with the Dolphins.

There are also plenty of reasons to believe that a real corner might have been turned for the former 8th overall pick. For one, it’s not completely unprecedented for a quarterback to find his way later in his career. Going from top ten pick to mediocre starter to star wouldn’t even be close to the most dramatic story for a high level NFL passer in the past couple decades.

Kurt Warner’s famous rise from the Arena Football League to two-time NFL MVP was far more unexpected and he didn’t take his first snap as an NFL starter until age 28. Steve Young went 3-16 as a starter with the Bucs, got traded to the 49ers to backup Joe Montana, and then eventually took over as the starter at age 31 and became one of the greatest quarterbacks of all time. Rich Gannon spent time with three different franchises and was widely viewed as a replacement level quarterback until he landed with the Raiders at age 34 and ripped off four straight Pro Bowl seasons and two First-Team All-Pro nods.

There are also stories like Jake Delhomme, Vinny Testaverde, Trent Green, and Marc Bulger. What about Carson Palmer’s late career renaissance with the Cardinals?

The recent comparison that might fit best for a potential Tannehill career path is that of Alex Smith, a player that Titans fans once spent a lot of time comparing Marcus Mariota to. Let me know if this story sounds familiar. Highly drafted quarterback goes to a bad organization and struggles with both performance and injury, but he shows enough flashes to earn a second contract with the team that drafted him. Eventually, the team decides to move on and trades him for a draft pick (a 2nd rounder in Smith’s case). The quarterback goes to his new team and immediately puts together the best year of his career during his 9th year in the league.

Smith would go 50-26 over five years as the starter for the Chiefs, completing 65.1% of his passes with a YPA of 7.2 and an average of 20.4 TDs and 6.6 INTs per season. Kansas City made the playoffs in four of those seasons.

Again, “Alex Smith 2.0” is not the goal, but it’s worth noting that the elevation in Smith’s play didn’t suddenly evaporate after year one with the Chiefs. Tannehill’s 2019 season was far better than Smith’s 2013 and his performance at his first stop was much better than Smith’s stint with the Niners as well. The point is that Smith’s improved level of play sustained in subsequent years.

The fact of the matter is that changing teams matters to quarterbacks. If you look at some of the “one year wonder” busts that people use to warn against paying Tannehill — Nick Foles, Case Keenum, Brock Osweiler — all of them had a great season on a great team, cashed in to play for a bad team, and fell back to earth. The fact that Tannehill’s “one year” came with this team, under this coaching staff, with this supporting cast should matter to Titans fans (and it should matter to Tannehill too).

For a fan base that just spent much of the last five years bemoaning a lack of continuity afforded to Mariota, shouldn’t the idea of Tannehill — who didn’t even get starters reps in a brand new offense until Week 7 last year — coming back with the same offensive coordinator, the same wide receivers, and at least four of the five starters on the offensive line offset some of the regression concerns? It does for me.

Tannehill’s fit in the Titans offensive system is virtually unquestioned. His mobility and success throwing on the run outside the pocket were a big part of Arthur Smith’s attack last season and his legs provide value to Derrick Henry by keeping back side edge defenders honest against outside zone looks. The idea of running it back with as much of the offense intact as possible is very appealing to me. Maybe sprinkle in another weapon out of the backfield and more speed at receiver and you have a formula for another run at a top five offense.

Why the Titans should chase glory with Tom Brady…

For a lot of people, this argument is as simple as this… if you get a chance to sign the greatest quarterback of all time, you do it. Period.

Obviously, if Brady was 32 years old this wouldn’t be a question. You hand him the blank check and start printing jerseys (and money). However, there is also zero chance that the Patriots allow a 32 year old Brady to even sniff free agency, much less agree to an extension that guarantees they can’t franchise tag him.

The biggest questions with Brady can be summed up as follows:

However, it’s also fair to point out that few players have ever spent more time, money, and energy taking care of their body than Brady has in his career. Make fun of the plyometrics and avocado ice cream all you want, but the guy hasn’t missed a game due to injury in over 11 years and allegedly had a pass clocked at 61 miles per hour last offseason, a number that would have ranked second behind only Josh Allen among all the passing velocities recorded at the combine since 2008.

It’s also fair to say that Brady’s mind remains as sharp as ever. Picking up a new offense — or blending his language with Arthur Smith’s — should be relatively short work for a guy who’s seen more NFL football than just about anyone to ever play the game.

Then you have the “angry Brady factor”. The last time TB12 entered a season feeling slighted was 2016, when he missed the first four games due to suspension following “Deflategate”. Brady went 14-1 including the playoffs after coming back, posting 28 touchdowns against just 2 interceptions while sporting an 8.2 YPA during the regular season on the way to his 5th Super Bowl win. He’s already one of the most competitive players to ever set foot on a field, so getting a highly motivated Brady who wants to prove that he can win big without Bill Belichick is certainly an enticing thought.

As is the idea of importing Brady’s championship pedigree, ability to hold teammates accountable, playoff experience, and general football brilliance to a roster that proved to be ready to compete at the highest levels in 2019. Is there a scenario where a rejuvenated Brady throws gasoline on the Titans fire and puts them over the top? Absolutely there is and that alone makes this a tempting move.

If you asked me to choose between the two, I’d still lean towards Tannehill, but ultimately I’ll be happy as long as we don’t have to find out what’s behind Door No. 3. My guess, based on reading the tea leaves of various reports, is that the Titans feel the same way.

We can have our preferences in this debate — and there are certainly valid arguments on both sides — but let’s not lose sight of the fact that these are two very good options on the table and which ever one Jon Robinson ultimately chooses should put the Titans in good position to be contenders again in 2020.